You are here: Home / Gurujī's seminars / Śiva depends on Himself – He is Svatantra

We are all the time paying attention to the body. It’s not important. He sends people. He has a lot of people. So don’t worry. He told the sage Vasugupta: “May this teaching not be interrupted”. Śiva told Vasugupta that “May this teaching not be interrupted”. So, it’s like this. Trust Him. Trust Him. Śraddhā (Faith, вера in russian). Śraddhā is very important. Never be in despair. Never “Oh my God”. No, don’t worry. Never worry about anything. Don’t worry. He will fix it. He fixed this world many times, so don’t worry. He will fix it. This world was destroyed two times in the last century. He fixed it. You cannot imagine the Power Paramaśiva (the Supreme Śiva) has. Tremendous. So, “Parama” like “Paramount” in English – Supreme, Superior. 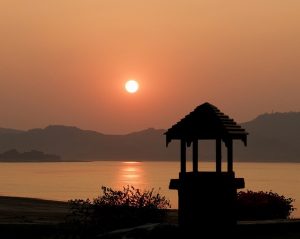 This is the name of the Lord: Svatantra. Because He depends on Himself.

People speak about Tantra, but what’s the meaning of Tantra? People speak about what they have no idea about. It’s usual. What is Tantra? They are books, yes. But “tantra” is not “book”. “book” is “grantha”. “grantha” (“book” in Sanskrit) or “pustakam”. “grantha”, “pustaka”. “tantra” is not “book”. They are books, but the meaning of “tantra” is not “book”. There are many meanings of “tantra”. For example, “tantra” means “dependent on”. For example, “Svatantra” – “dependent on Oneself”. This is the name of the Lord: Svatantra. Because He depends on Himself. And you translate “Svatantra” as “Free”. And “paratantra” – “depends on another”. “para” is “another”. So, is not Free, is bound (tied, is in bondage).

For example, people depend on Him. So people think, “Oh, we depend on Him because of the rain, because of the Mother Nature”. So other people will say, “No, but it’s not the creation of God. God is creation of atoms and particles”. It’s not that kind of dependency. Because when you say that, all the atheistic people will attack you: “No, but this was created by big bang”. Dependency is on the level of “I”. I-ness. When you say “I am”, you are borrowing “I” from Him. This is dependency. So, when atheistic say, “Oh, how do you prove that God exists?”, you don’t have to prove that God created the universe. No no. You have to ask the atheistic: “Who are you?”. “I am…”, Who is that? It’s very complicated to explain that.

The presence of an atheist reaffirms the existence of God.

“I am a scientist. I am engineer”. What’s the origin of your “I”? They cannot explain. They borrow from the Lord. That’s why the great master Śaṅkarācārya (the founder of Advaita Vedānta –non-dualistic Vedānta–) said: “The presence of an atheist reaffirms the existence of God”. So you don’t need to prove the universe, the creation, No no. “Who are you?”, “How is it possible that you exist?” – This is the problem. So if the person replies: “Oh, I create my I”, something like this, “Me, my creation”. So, you are God. If the person says “Oh no, it’s not my creation”. Well, the origin of your “I”, this is God too. So they can say that they are not God or they are God, but anyway they cannot remove God. It’s impossible. Because to remove God they need to explain how is it possible that they exist without God. This is the right way to do it. To reason with the atheistic people.