You are here: Home / Gurujī's seminars / Śiva doesn’t need the intellect to determine what happened in deep sleep

You understand that it’s difficult to have a right intellect? To reason spiritually. You need to forge this intellect with the scriptures. When the process is finished, your intellect cannot be cheated again by philosophies.

Translation: Nonexistence cannot be contemplated, and there is no absence of stupefaction in that condition either, because by coming into contact with “abhiyoga” –i.e. by hearing the declaration made by the person who has just emerged from that state–, it is true that it –i.e. the condition of stupefaction– really existed||12||
For this reason, that artificial knowable is always like the state of deep sleep. However, that principle of Spanda is not thus perceived or realized, that is, as a state of recollection||13|| 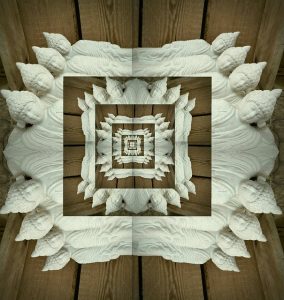 An objection!: A knowable object such as blue, etc. is recollected after having been seen and determined. But there is no determination of that which is void because the activity or function of the intellect –the determinative faculty– is off at that time. Then, how is it said, from the subsequent determination “that really existed” expressed by the one who has just emerged from the state of void, that “that is a state of stupefaction or insentience”?
What the objector is saying is specifically that “how can there be certainty or determination that that condition of stupefaction or insentience –i.e. unconsciousness– really existed if the intellect was OFF at the moment of the experience of void?”. The intellect is the determinative faculty by which one determines what an object is, e.g. “it is blue” in case one sees that color. However, if the state of void is artificial, that is, if it is invented or manifested from Supreme Consciousness as the rest of objects, but it is NOT the Supreme Consciousness essentially, then how could it be determined to exist without an intellect ON? This is the doubt!

So, if the intellect is off, how is it that a person that emerged from deep sleep is able to determine what happened in deep sleep? Because the Self doesn’t need the intellect to determine. He doesn’t need. He can determine by Himself. Remember that the intellect is a creation (manifestation) of His Power. Anyway, when one emerges from deep sleep, one doesn’t remember the void. This is very subtle. For example one says: “Oh, I dreamt about nothing”. One is not remembering the state of void. No. One is remembering the śūnyapramātā. One is remembering the experient of the state of void. And how is this proved? Because one says “I” (the experience… experience the Knower, śūnyapramātā). The pramātā – “I”, “I dreamt about nothing”. The Knower that dreamt about nothing is the śūnyapramātā (the Knower of the void). So you are not recollecting the void itself, but the perceiver of the void. The limited perceiver. That’s why you say, “I dreamt about nothing” or “I didn’t…”. “I” first.

“I had this dream”; you are not remembering the dream, but the Knower of the dream!

Commentary: This is the meaning — Deep sleep has always the nature of Moha or Delusion –Māyā– and is accomplished by everyone effortlessly. Then, “what is the point of this other void to be gained by the effort of samādhi since there is no difference in regard to unreality of them both”?
So if you are everyday entering into the void of Māyā effortlessly, what’s the point of gaining (through buddhism or vedānta) a void in wakefulness through enormous efforts? If you already have it. So it’s completely absurd.

Commentary: And as a general rule, many enter this great ocean of Moha or Delusion –Māyā– called void, which is difficult to be crossed. The ones who do so are mostly Vedantī-s or followers of Vedānta, Naiyāyika-s or followers of Akṣapāda –the founder of the system Nyāya–, the followers of Sāṅkhya, Buddhists, etc. This void has become an obstacle even to those who are desirous to enter the principle of Spanda because they relax their efforts.
Why? Because when the prabuddha (the person that is about to get Final Liberation) touches the state of Final Liberation, at that moment the void appears. Because He is not ready. When Kuṇḍalinī starts to pierce here (in the head) and moves upto Unmanā stage, the prabuddha… to the void (cannot tolerate). It’s as if the fuses are gone. So, Void. So, with this buddhists and all these people (philosophies), that person (that prabuddha) thinks: “Oh, I attained Final Liberation”, because he is in the void. So, at that time, he is a śithilībhūtaprayatna. He is someone that relaxes (śithilī-bhūta) his prayatna (his efforts). Because he thinks that this penetration of Kuṇḍalinī here (in the head) generating the void is the Highest Reality. But the ones that know that the Highest Reality is beyond void, they persevere (meditating and meditating).

I experienced this state of void for many years. Void void. But one day, when it started to pierce, no void for me. Now, for example, it’s piercing. But I am not in void. I can have my eyes open. It’s piercing. Because I crossed the ocean of void. But I did that because I know that the state of void is not the Highest Reality. But many people stop their meditation when they experience void. Because they think, “Okay, this is enough”. They need to continue till one day they won’t fall into the void, but they will advance to the Light of the five final tattva-s (beyond Māyā). So this void is Māyā, it’s a veil of ignorance. And they mistake that (this crap, this Māyā) for Final Liberation. It’s not Final Liberation! It’s a delusion. It’s an illusion.
Excerpts retrieved from 15:45 to 28:25 of Spandakaarikaas Seminar – chapter 1 – 4: