You are here: Home / Gurujī's seminars / Śiva’s revealing aspect (Guru) can force your Self (Śiva) to reveal Himself to you 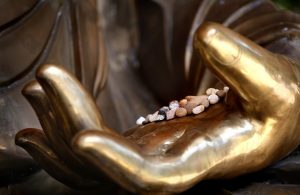 Śiva is ‘angry’ because Śiva is hiding from you.

This is Śiva angry: Śiva is ‘angry’ because Śiva is hiding from you. You are all the time suffering. All the time thinking: “Why this in my life? What happened? What will I do?”, yes? “kiṁ karomi? (what will I do?). Oh what a disaster”. It’s a disaster after the disaster. It doesn’t matter where you live. I know. You can live in vietnam, in china, in argentina, in chile, peru, usa. It’s all the time the same problem. You are suffering. Nothing else. You can tell me, “No I am enjoying with a lot of objects, women, men”. No, you are suffering. I know. Because it’s a law. And nobody escapes from this law except by the Grace of Guru. Nobody escapes. It’s a law. So I can visit an island in the middle of the pacific and people there are suffering. No other way to escape. It’s a law. It’s like the gravity force. Wherever you move on this planet, people suffer from gravity force. They cannot escape. To escape, you need a rocket… tremendous rocket, knowledge, yes? to escape. Well, in the same way, to escape from this ignorance… planetary ignorance… universal ignorance… More than ‘planetary’, ‘universal’ ignorance, because you can go to mars and you continue to be ignorant there on mars. You can go to another galaxy, you continue to be ignorant – Ignorant about who you are; Not about objects. You can be very smart about all the objects in this universe. But you don’t know who you are.

All your activities are meaningless because you are not conscious of who you are!

If you don’t know who you are, so you are not in the sentence! What is the meaning of this? For example, you say “I watch this universe”, but you don’t exist! Because “who are you?” – “I don’t know”. If you don’t know, you don’t exist. It’s like “watch the universe”, there is no “I” there. Solid. So all your activities are meaningless. Sorry if I destroy your fantasy. They are meaningless because you are not conscious of who you are! So it’s absurd. So you do actions but it’s actions like in a dream. It’s not real actions. So you try to be happy but you try like in a dream. There is no ‘Real I’ trying. This is the problem.

If the Guru doesn’t want to teach you that you are Śiva and to reveal Śiva for you, not even your Śiva can help you.

So when Śiva doesn’t want to reveal that you are Him, because He doesn’t want… His aspect like a Guru can force your Self to reveal Himself to you (that’s why Guru is higher). I can force your Self (Now!), I can force your inner Self –your Śiva– to be revealed to you. This is my Power; the Guru. But if I am angry with you, Śiva cannot protect you. That means that if I am angry with you… To be angry with the disciple is not only that… with a stick pursuing the disciple, yes? to punish him. No, is angry… is not interested in the disciple. Because the disciple is not worthy; is not worth his efforts to teach. So ‘is angry’. This is the real meaning. So, not even Śiva can help you. Not even your inner Self can help you. That means that if the Guru doesn’t want to teach you that you are Śiva and to reveal Śiva for you, not even your Śiva can help you. That means that you are completely helpless. For example, if I am angry with a disciple, so the disciple has to leave. Okay, that person leaves. That person can tell, “Oh, but I am Śiva, I don’t need Him”. No. Even if you are Śiva, you cannot. You cannot force your Śiva to reveal that you are Him. You will have to go to another person (another Guru), yes? but it’s my same Śakti, because I am One only. But another aspect, yes? and maybe you will receive or maybe not, because maybe I will continue angry in another person… with you… in another body. This is the meaning of ‘angry’; it’s not only that it’s angry like a person angry. Doesn’t want to.

Śiva is angry with most people in general. Because all of them are Śiva but anyway they don’t realize that. They live like animals.

If I (not Gabriel, Real I) don’t want to share my knowledge with you, you cannot. You cannot reveal your Śiva by your Śiva Himself. It’s impossible. That’s why ‘Śiva cannot protect you’. So if Śiva is angry with you, if Śiva doesn’t want to reveal that you are Him (your own Self)… Śiva can protect you, Śiva can give you that. Because Śiva is angry with most people in general. Because all of them are Śiva but anyway they don’t realize that. They live like animals. So Śiva is angry with them. Why? His reasons are very mysterious. Nobody knows why. Someone can say because they do this action or they do that action. No. Maybe they are… they are undertaking tremendous task about charity, but anyway Śiva continues to be angry. It’s a mystery. But despite that, Guru… when you find Guru, Guru can force that Śiva to reveal His nature to you – That you are Him, even if He is angry with you; even if He doesn’t want.

Guru is like Śiva but in the higher level. It’s Śiva revealing.

Śiva in the disciple doesn’t want to reveal His nature to them. But Guru can force Him. So people say “But Guru is Śiva!”. Yes and Not. It’s Śiva, but is higher than Śiva, according to Gurugītā. This context of this famous text. Guru is like Śiva but in the higher level. It’s Śiva revealing – Anugraha, giving Grace. So many many secret meanings hidden in Gurugītā that the common mind cannot understand. No. He needs the help of Guru. Because Guru wrote that in the first place. So you say “Oh, I will understand by myself because I am Śiva. Yes, I am Śiva, so what’s the difference”. Okay, you do, and you cannot do it. This is because Śiva is angry with you. Śiva doesn’t want to reveal. So you start to understand all like a human. You cannot escape from your humanhood (from your human state). Yes, you are Śiva. But in practice you are a human, you are not Śiva.

In the context of Gurugītā, there is this subtle difference between Guru and Śiva: Śiva giving Grace (Guru) or Śiva doing the rest.

But when Guru is pleased with you (like now, for example, I am revealing), so your Śiva inside feels this teaching coming from Guru and starts to move, to appear. So you can enter Samādhi. You can enter meditation or Samādhi at the end… or whatever. Because my speech forces that state, yes? You see your Sahasrāra, yes? Forces. Because it’s superior to Śiva. Yes, Guru is Śiva, I have no doubt. But in this context of Gurugītā, there is this subtle difference: Śiva giving Grace or Śiva doing the rest (manifesting the universe, maintaining the universe, withdrawing the universe or hiding His nature… this is common Śiva in all people). All people create (they manifest), they maintain (they preserve things around them), they destroy those things or they withdraw those things (not “destroy” because there is no destruction, it’s only “withdrawal”), or Śiva hides His nature in them. And Śiva like Grace is Guru. It’s Śiva revealing. That’s why Guru is all the time so praised. But people think that Guru is only a person with a T-shirt like this and not like that. No, this is not the Guru.

It’s like when you see on your computer… this is a good example for you to understand. For example, imagine you have to access the programs on your computer without icons. It would be very complicated. Imagine you have to access the program with the command line… writing codes to access a common program you use everyday (e.g. Office software). You have to access the program by writing complex codes to start (to activate). It is very complex. But you have an icon on the screen, so you double click the icon, and the program opens. In the same way the body the Guru assumes to teach is like an icon. The Guru is big… is the program behind the icon. But through the icon, you access the program. In the same way, through the body of the Guru that the Guru assumes at a certain point (now this body, in the future another body. Whatever body… is the icon), you click, you get in touch with that body (with that human… apparently human being), so you access this knowledge (this Revelation). This is the meaning of the form of the Guru. But it’s not a personality cult, like common mind thinks – “It’s a personality cult… like a big ego receiving praises”. No no no. It’s the icon. Everyday your icon receives many clicks because they are useful to get in touch with program that you don’t know how to reach by yourself. You need the icon.