You are here: Home / Gurujī's seminars / Śiva is the source of the glorious group of powers appearing in the form of this world

Translation: We laud that Śaṅkara –an epithet of Śiva– who is the source or cause of the glorious group of powers, and by whose opening and shutting of His eyes there is dissolution and emergence of the world.

The compound “śakticakravibhavaprabhavam” means “the source of the glorious group of Powers”. But there are other interpretations. If you consider Śakti as the twelve deities such as Sṛṣṭi, Raktā, etc, and if you consider “vibhava” as a show –as a Play–, you translate “śakticakravibhavaprabhavam” in this way (The topic Sṛṣṭi, Raktā, etc is very very advanced. It’s explained by Abhinavagupta in Parātrīśikāvivaraṇa. So you need to know some other things before understanding these 12 deities):
Interpretation 1: “The cause of the immensity of the play whose nature is creative activity, maintenance, reabsorption and concealment of the aggregate consisting of twelve deities, such as Sṛṣṭi, Raktā, etc.”.

Another interpretation is if you consider that śakticakra is this universe. And evidently it’s this universe, yes? All these powers. Every object is a Śakti, is a power. The mind, the intellect… powers. For example, the Gocarī śakti-s control the intellect, the ego and mind… powers. If you consider this, the third interpretation of “śakticakravibhavaprabhavam” would mean:
Interpretation 3: “The source or cause of the glorious group of powers appearing in the form of this world.” 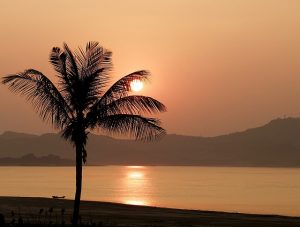 Vāmeśī or Vāmeśvarī is formed from 2 words: “vama” and “īśī”. “īśī” is Mistress, and “vama” means “left or the opposite course”. So, Vāmeśī or Vāmeśvarī (because “īśī” and “īśvarī” is the same – “Mistress”) means “this power that takes you in the opposite course”. So, the natural course is downwards, yes? Śiva descends into matter; becomes a limited individual. Vāmeśī or Vāmeśvarī is the Power that pushes you upward –into Śiva again–. Khecarī are double energy. Khecarī śakti-s move in the sphere of Māyā. Khecarī śakti-s –these powers– move (carī) in Kha (in Māyā; in the space of Māyā). It’s very interesting. Khecarī is a aluk compound. In general, compounds are formed from crude words (pratipādika-s) –crude forms of the words–. For example, yoga + āsana = yogāsana (posture of yoga). All the crude forms of the words. But when a compound is formed, if one member of the compound is a declined word (in accusative, in locative… any case), that compound is known as aluk. So in this case “Khe” means “in Kha” –Locative–. So the Power that moves (carī) in Kha (in the void of Māyā). In that void, there are 3 other powers inside. Inside Khecarī, 3 other sub-powers (secondary powers; Ghoratarī…). Ghoratarī powers are the terrible powers that only embrace Rudra-s.

You enter into deep sleep and you cannot continue to advance to the fifth tattva because ghoratarī śakti-s push you downward.

Who are the Rudra-s? – Jīvanmukta-s; The liberated beings are Rudra-s. So, ghoratarī-s only embrace Rudra-s. The rest of the people, ghoratarī-s push downward. For example, you go to sleep – you sleep, dream, next you enter into deep sleep. It’s a void. You enter into deep sleep because ghoratarī śakti-s push you downward. And you cannot continue to advance to the fifth tattva, fourth tattva… No, because… pushed downward. But if you are a Rudra, you can advance beyond deep sleep. In fact there is no deep sleep for you –You continue, there is no void–. So every night you are about to get Final Liberation. Every night, but… “Puff!”, Void. Like a veil being drawn by Māyā. This is ghoratarī śakti-s. So everyday you can get Final Liberation. But, “No, not yet”. That deep sleep is full of tamas, yes? Destroys your body; if you sleep a lot, you destroy your body.

The terrible powers help yogi-s but destroy people that are attached to the fruits of their actions.

Gocarī… “go” means cow, but in this case, no (obviously). It’s not “the powers of cow”, no. “go” in this case means “to move” –like in english–. It is the powers that control intellect, ego and mind (they move constantly). That’s why Gocarī – The power that moves in “go” (in this constant activity –mental activity–). And Khecarī… Ghoratarī śakti-s I told… and there are too Ghora śakti-s (the terrible powers). The terrible powers help yogi-s but destroy people that are attached to the fruits of their actions. So the deep sleep is real crap, is horrible. But, there are the Aghora śakti-s too. All in Khecarī group. The Aghora śakti-s are compassionate, so they help you… even if you are not worthy of ascending.

Question: They say that deep sleep is when we rest, and that when we don’t have deep sleep, we don’t rest. But you said that deep sleep destroys the body.
Master: Yes, you’re right. In the end destroys your body. In deep sleep, you take a rest because you are near the Self. But destroys your body because it’s full of ignorance (full of tamas). How to explain this… It’s like a medicine. You take a medicine… but the secondary effects, yes? For example, for my high blood pressure I took a special drug for many years. It helped me a lot; it is helping me a lot. But this year I started to notice that my feet were very very swollen. So my doctor told “half of the dose”, and my feet normal again. Secondary effect. The same with deep sleep.