You are here: Home / Gurujī's seminars / Śiva is the cause in whom all this universe (effect) rests

Translation: Since He has a unveiled nature, there is no obstruction to Him anywhere, in whom all this universe rests and from whom it has come forth.

An objection to the statement, “All is Śiva. The universe emerges from Śiva”: “Only the emergence of that which is contained in something else occurs –i.e. there can be emergence of something only if it is already contained in another thing–. Therefore, is this world resting in a certain place at the very beginning?”

If the world doesn’t exist in Śiva, the world cannot exist.

The reply: “It is nowhere resting, but only in That whose nature is Consciousness.” That is why Vasugupta says “yatra sthitam”, “idaṁ sarvaṁ kāryaṁ” i.e. “in whom all this universe rests”. In whom all this kārya (all this effect) rests. The effect is the universe, Śiva is the cause. If the world doesn’t exist in Śiva, the world cannot exist. But if it’s revealed, so it’s Śiva. Because nothing can emerge without His light. 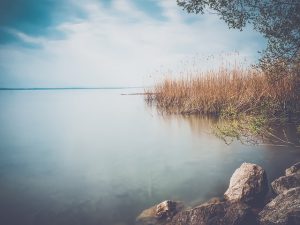 Even though this world has come out of Śiva, this world still rests in Śiva.

The reply is: The words should be put together this way, by repetition: (“yasmānnirgatamapi sadyatra sthitam”) –in the aphorism– i.e. “even (api) having come forth (nirgatam) from Him (yasmāt), all this universe still rests (sthitam) or exists (sat) in Himself (yatra)”. So, in this case, the particle “ca” (in the aphorism: “yasmācca nirgatam”) should be understood not like “and”, but like “even” – Even though this world has come out of Śiva, this world still rests in Śiva. This reasoning sounds tremendous! These reasoning-s constantly forge a new intellect. All the time reading this… reading this.

The objections continue. There is always the problem of how to prove the existence of Śiva. But it is easily proved by one’s own existence. If one exists, Śiva exists. It’s impossible; you cannot deny Śiva because you cannot deny yourself. If you deny Śiva –God–, you have to explain where you are deriving your existence from? From whom or from what? “Well, from me” – “Okay, you are Śiva!”. “From someone else or something else” – “Okay, that is Śiva!”. You cannot escape. Your reasoning cannot escape from this vicious circle – Śiva all the time. The only way to prove that Śiva is not existing is if one doesn’t exist. But that is impossible. So Śiva all the time exists.

Even a miserable proof to prove that He doesn’t exist is again Him!

Another way to explain this is… If you put a proof to deny the existence of Śiva, what is the support for this proof? Śiva again! Because, the universe rests in Him. So even a miserable proof to prove that He doesn’t exist… is again Him. So it’s completely crazy! Atheism is completely… craziness. Because all those atheistic people are Śiva too. So what’s the point? They are trying to deny themselves. That’s impossible. Atheism is only possible in the case of: “Śiva is not a personal God that is good to good human persons and bad to bad human persons”. Yes, atheism is possible only in that case. But not with respect to the Great Lord as everything. Śiva is not a person; has no genitals, has no legs. And at the same time He has all. But it’s not personal. For example, many people think (for example) in this way (it’s childish, but it’s real): “Oh, today is my birthday. What a tremendous rain shower destroyed my party. Śiva is guilty, Śiva did it on purpose to destroy my birthday”. This is a personal God. But really, it’s raining because it’s raining. Not because… to destroy your party. It’s not personal.
Excerpts from 42:55 to 53:45 of the video Spandakaarikaas Seminar – chapter 1 – 1: