You are here: Home / Gurujī's seminars / Śiva and His inseparable Śakti constitute the indescribable Highest Reality that is always beyond utterance

Abridged excerpts from Gurujī’s seminar on Svātantryasūtram (The aphorisms on Absolute Freedom):

Excerpt from commentary on the above aphorism: Prakāśa and Vimarśa –Light and I-consciousness, viz. the Self and His Power– abide inseparably as one Reality. Their separation or difference takes place only in the sphere of words for the intellect to understand them both so much as possible. There is never a Power of the Self that is separate or different from the Self Himself. Besides, the Self together with His own Power are not objects endowed with attributes such as light, sound, mind, body, etc., but rather the imperishable immutable Witness of that –of those objects–. That point is made clear in venerable Spandanirṇaya. 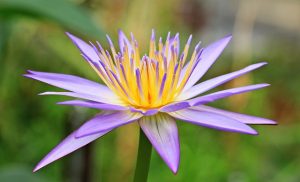 Yastu tattattvamitīha tacchabdenāsya nirdeśaḥ kṛtaḥ sa
Svātantryāmuktamātmānaṁ…|
iti śrīpratyabhijñākārikoktanītyā kalpitasyaivāpāramārthikasvarūpasya na tu tattvataḥ pāramārthikasya|
Translation: “That special mention about It –about Spanda (about Śakti)– which has been made by the word ‘tad’ here –in the last line of the aphorism 13 in Spandakārikā-s–: ‘tattattvam’ or ‘that principle of Spanda’, that word ‘tad’ refers to the supposed experient whose nature is not the Highest Reality, and not, as a matter of fact, to the Experient who is the Highest Reality, in accordance with what was described in the venerable Pratyabhijñākārikā-s –also called Īśvarapratyabhijñā–: ‘The Self not deprived from Absolute Freedom…'”.

When you read “Śiva”, that is not Śiva! It is a word we use to describe something that is not describable by words. He is so Free that He created this word for people to speak about Him.

You cannot remember Śiva, because you are Śiva!

According to the teaching of illustrious Kṣemarāja, here, in Spandakārikā-s I-13 — “However, that principle of Spanda is not thus perceived or realized, that is, as a state of recollection”—, the Spanda principle, whose nature is the Power of the Self, is indicated by the word “tad” –that–, but this word is not the Highest Reality truly because the Highest Reality is at all times Reality beyond utterance. So, in this aphorism, Vasugupta is explaining that you cannot recollect the Self (in the past) because He is here. You cannot recollect the Self in time because He is beyond time. You cannot say, “Well, I experienced Śiva in 2003, and now No”. Because He is constant; He is “Now”, “I am”. So no, it’s impossible. You can recollect for example, deep sleep. You can recollect and you can say, “Oh, I slept sweet”, “very deep” or “Oh, I don’t remember what I dreamt about”. You can say that. But not with Śiva. No, because you cannot recollect Śiva, you cannot remember Śiva. Because you are Śiva! He is here. When you realize this, that’s Liberation.

Absence of Bliss is Bliss too, because abandoning His Bliss is a display of His Svātantrya.

Some people say, “Well, but now I am not Blissful, so no, it’s not Liberation”. No, because absence of Bliss is Bliss! But this is difficult to understand – Absence of Bliss is Bliss too. For example, when you are meditating… you are meditating and you feel a little Bliss, yes? you feel sometimes little Bliss. That is Bliss. It doesn’t matter if little… bigger… it doesn’t matter, it’s Bliss! But all of a sudden, your mind says, “Oh, now I have to go”, “my daughter…” or “my son…” or whatever. So you abandon your sitting position and go to the phone and call. That act you do is Freedom; His Freedom (His Svātantrya). That is His Svātantrya. Because He abandons His Bliss and accepts absence of Bliss. And that absence of Bliss is Bliss too. Because it’s His Svātantrya, His Absolute Freedom. It’s difficult to understand. For example, now you are in bondage. You feel, “I am in bondage”. That is His Freedom. I am now liberated; it is His Freedom. His Freedom. Because He wants to. He wants to be bound, so He feels bound. And that’s Freedom. When you realize this, you are liberated.
Excerpts from 1:18:45 to 1:34:05 of Second day (1) – Seminar Svaatantryasuutram – Moscow