So, the spiritual aspirant has finally found a genuine spiritual teacher. What is next? He has to ask the spiritual teacher’s permission to be his disciple. This is generally bypassed in the West. People frequently access Yoga through Haṭhayoga (the most insignificant type of Yoga). They call Haṭhayoga “Yoga” out of sheer ignorance. It is like calling Pluto “the Solar system”. Well, that is the way mother spiritual ignorance arranged the things in the West. Usually people tell me that they are doing Yoga, but if I go depth at the subject, they end up speaking about Haṭhayoga postures and the like. They go the Haṭhayoga classes and so sometimes happen to find spiritual preceptors who use Indian philosophies as the foundation of their teachings. 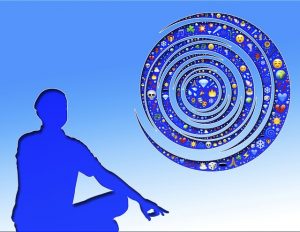 This question of being accepted or rejected is shocking to egos, especially in the West, where individuality reigns supreme, and most people consider that they in a perfect position to make decisions, control their lives, etc. Well, this is an illusion except in the case of a real person with real power, but most of people do not know it yet. As most of them do not have any real power, they cannot be in control of their lives. They are always carried by external circumstances. Apparently, they are the “doers” of their actions, but, as a matter of fact, the external circumstances (a way in which His Power appears) are the real doers. Anyway, as they call themselves the “doers”, they will have to reap the fruits of their supposed actions. This ignorance is never-ending.

Let us advance in our study. There are different classes of genuine spiritual teachers according to their degree of experience and knowledge. If the spiritual teacher is too elevated, he will not see disciples but only the Self. In this case, he is not fit for being a teacher while His Supreme State is fully present. So, he will have to come down a little in order to see disciples (i.e. limited individuals desirous to find a way out of spiritual ignorance). Not all the enlightened people will teach about Self-realization. I repeat, if the teacher is too elevated, he will not be able to teach properly because all people will look like the Self to him. Not seeing any people in bondage, he won’t see any use in Final Liberation. Consequently, a spiritual teacher should come down a little or not to be so elevated to start with.

The interests, ideas, actions, etc. of a spiritual teacher (a real person) have nothing to do with those of the rest of unreal people. This is shocking to a spiritual aspirant if he is not mature enough. In this sense, and only in this sense, there are different degrees of disciples. The great disciples can understand the ways and teachings of a real person, but the rest of disciples will have problems, because they are so used to being around unreal people all day long. It is just the matter of time for them to accept the existence of another type of person (viz. a real person). What is real has power, what is unreal has no power. By “power” I mean “capacity to know and do” in a real way. What is this? Capacity to remain in one’s own Self instead of in the mind, ego, body, etc. Someone who has realized his Self to a certain degree at least, has personal power. Why? Because he has a “real I” and not a mere ego that is a product of false identification of the Self with the mind and physical body.

Now an example: imagine that the spiritual aspirants (and the rest of ordinary people) are like dust floating in outer space. They are constantly dealing with dust and more dust to the point where they think that such dusty life is “Reality”. One day, these spiritual aspirants find a “real person” (a genuine spiritual teacher), who is like a planet. The size of the planet depends on the level of his spiritual attainment (from Pluto to Jupiter). At the moment of the contact, this space dust called “spiritual aspirants” will be affected by the planet. If the planet is very big, they will be more affected, obviously, and vice versa. Anyway, even if the spiritual teacher is a little one, is always bigger than the biggest ordinary person in this world. The biggest ordinary person in this world is just dust in the end. In other words, even if a dust particle is big, it will be prone to changing according to the winds that blow in outer space (external circumstances). In order to “stand up to” the force of external circumstances that “blowing like a wind”, one has to be real and planetary. A mere dust particle, however big it may be, cannot do it.

Imagine that the smallest spiritual aspirant meets the most massive spiritual teacher. In this case, it would be like a little dust particle meeting Jupiter. Evidently, the spiritual aspirant will be affected by that teacher in an indescribable way. Jupiter has a great mass and gravity force. Besides, there is radiation being emitted by it. In this way, if the smallest spiritual aspirant meets the most massive spiritual teacher, the former will not be able to follow the latter due to the colossal difference separating them both. Therefore, the size of the planet must be in accordance with the size of the dust particle. The average spiritual aspirant is not very elevated. So, say, he meets a planet like Mars (a small planet) and is immediately affected by the gravity force of this planet. Next, he starts to move around the planet forming a disc and later a satellite, etc. Of course, it is just an example and not an astronomical truth. Over time, the spiritual aspirant becomes a disciple and begins to accumulate “mass” in the form of power of knowledge and action.

In due course, the disciple will turn into another planet (a real person). This is his achievement of spiritual enlightenment. According to the magnitude of it, he could become a planet even bigger than the one of his spiritual teacher, etc. Final Liberation, though one, will appear in various degrees of Self-realization. This is always controlled by the Self.

Well, that was just a mere example in order to show how the process will proceed in the case of a meeting between a genuine spiritual teacher and a genuine spiritual aspirant. There are many cases of little spiritual aspirants desiring to get in touch with even incarnations of God Himself. This would be like a little space dust particle rushing toward the Sun. Even if the Sun tries to “pretend” that it is not the Sun, the dust will be tremendously affected anyway. In this sense, if you, as a spiritual aspirant, have to visit your spiritual teacher (who is an incarnation of God Himself) clad in a space suit, your relationship to him will be problematic in the end. I am not joking but speaking the truth in a figurative manner. If the level of the teacher is colossal and the one of the disciple is microscopic, no spiritual enlightenment will result. The level of both of them should be adequate or no Self-realization will take place in a right way.

I experienced something like that with my own Sanskrit teacher. He knew too much about Sanskrit and other languages. I had a hard time trying to understand him. My intellect very often just had to give up which resulted in serious headaches. No matter how much he tried to be understandable, due to his massive knowledge, I could never feel comfortable in his presence. This is one of the problems as far as acquiring Sanskrit knowledge, if your intellect is not powerful enough. Of course, everybody thinks they are the happy possessors of a powerful intellect (I thought so in 1989), but when a person finally meets one of those massive intellects, one realizes his intellect simply cannot cope with the task of learning so many things at the same time. It is a serious intellectual challenge. The first time I met him, he told me that he would not teach me to write in signs because it was “too elementary” (no jokes). Thank God I had learnt to write in signs on my own previously. Nobody had taught me that. You can use my experience and then imagine the position of a spiritual aspirant meeting a massive spiritual teacher that is not only a Sanskrit scholar but also a Self-realized being. Obviously, if the spiritual aspirant is not adequate, he will feel frustration in the end. Even if that massive spiritual teacher compassionately slows down his high speed, only “high-end” disciples will catch up with him. Therefore, a spiritual aspirant should wisely look for a teacher who is suitable for his own spiritual size.

Besides, a massive spiritual teacher is very often cryptic. He gives short but meaningful teachings. If the disciple is not elevated enough, he will not understand his teacher. For instance: “Blue cube… effervescence”. And the disciple will think: “What did he mean?” The experience of a blue cube and the associated effervescence is an experience had in a higher state of consciousness, as the Power of the Self rises up through the spinal column and reaches the crown of the head. These experiences arise during the trances of someone who is near Final Liberation. As I explained it to you, you have a better idea of what that massive teacher meant by “Blue cube… effervescence”, but with nobody explaining things to you, you will be in trouble. If you do not understand the teachings, you cannot follow them either. Well, a vicious cycle in the end.

All in all, the quality of the disciple must be in accordance with the quality of the spiritual teacher. If the latter is too elevated, you will not be able to understand and follow him unless you are of his caliber. In the next post, I will keep speaking about this topic.