You are here: Home / Basic concepts / Self – Power of the Self – limited individual (Part 4)

Summing up the teachings now:

So, the starting point for a limited individual is always “becoming a spiritual aspirant”. These spiritual aspirants are fit for being instructed but, being still limited individuals, they are subject to a great deal of limitations. These limitations are, obviously, a product of their spiritual ignorance, and this spiritual ignorance is brought about by His Power. This is why, in the end, the spiritual aspirants will get final liberation (spiritual enlightenment) through the Power of the Self, one way or the other. Because the Power of the Self is the only way they can get in touch with the Self, as I stated above. 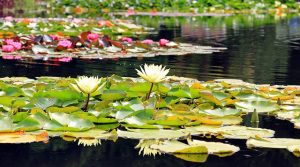 Spiritual enlightenment occurs “always” within. As it is obvious, I am using the word “within” for lack of a better word. By “within” I mean that “spiritual enlightenment is not related to anything outside”. Once again, I have to use the term “outside” for lack of a better definition. Therefore, there is no spiritual enlightenment “in group”. Certainly, the “in group” stage is an important phase in one’s spiritual evolution, but final emancipation will happen in the solitude of one’s own Self inside. It is not about masses of people meditating, performing rituals, pilgrimages, etc. NO. My own personal experience shows this: I was fourteen years in spiritual groups, but my most important spiritual experiences always occurred in the solitude of my room, inside.

The Self is like an “animal” attacking His prey when the latter is alone. Even only one of my spiritual experiences had in the solitude of my room was greater than the sum of all the spiritual experiences I had while meditating, chanting, etc. in a group. The “in group” stage is a necessary one in order to accumulate merits. But once the amount of merit is enough, one starts to avoid “groups”. This is the way it will be for the vast majority of spiritual aspirants, and I am absolutely sure about it. And yes, once one attains spiritual enlightenment, he can return to the groups if he wishes so, because such a person is “free” in the fullest sense of word. However, spiritual aspirants being still attached to groups are not mature enough, from a spiritual viewpoint. It is like going to school. You go till you get a degree. After that, you are not supposed to keep going and going to school any more, except for teaching other people perhaps. The same thing is true as regards the spiritual path.

As a result, despite the presence of “groups” in the first phase of one’s spiritual evolution, the final stages of the path will be spent in solitude. I am not saying that one will go to the woods and so on. NO. But, from a certain point on, one just does not need a group to keep advancing in his evolution. In fact, he will prefer the solitude of his room to fully realize the Self. In the last phases of the human evolution, even the presence of one’s own physical body is sometimes a distraction during the trances, let alone other people around! I know this through direct experience. I do not need to deduct it or prove it by scriptures. One becomes like a bear entering hibernation mode, so to speak. Yes, the worldly life of that aspirant continues as always (he will have to manage it), but he is prone to being alone with the Self most of the time. Other people become a factor of disturbance during the trances where eyes must be closed. Fortunately, this advanced phase in spiritual evolution is relatively short. After attaining a certain degree of trance, one can stay with other people and his trance is not disturbed at all, because he can enjoy the Self even with his eyes open.

To be in trance with the eyes open is a mark of a very advanced spiritual aspirant. He is practically spiritually enlightened indeed! In short, he experiences Freedom during periods that are longer and longer every day. This is a very limited way to describe the process, because “time” is not perceived during the trances, but I have to describe the things in that simple manner for most spiritual aspirants to understand me.